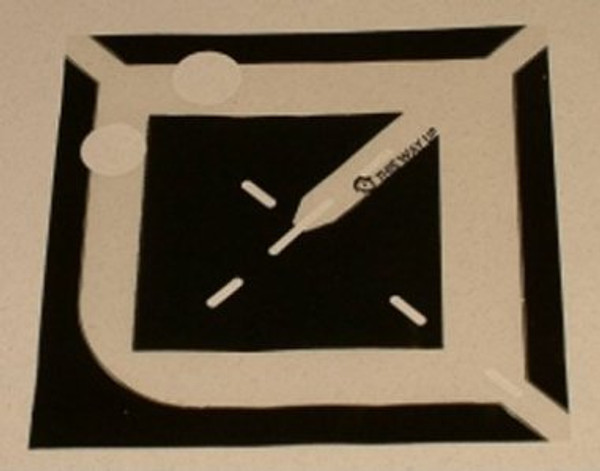 Statfeet are 89mm squares of conductive polypropylene film, coated with specially formulated inks to form powerful, yet passive, electrical devices. Their unique design, using Ringmat Developments’ proprietary STATMAT® technology, breaks up the interference from electromagnetic fields that would otherwise build up around components from their surroundings.

Statfeet are used under Ringmat Feet, the feet of components, or under Ringmat Domes, cones or other forms of single point isolation support where they are used in place of a component’s own feet or where a component has no feet of its own. Such components may be loudspeakers, turntables, CD, DVD and SACD players, televisions, video recorders and other items of hi-fi or A/V equipment. Each loudspeaker should be considered a separate component.

A Statfoot is automatically supplied with each set of Ringmat Feet and with many of the Vivacity AR Packs.

HOW STATFEET WORK
Statfeet work in much the same way as Statmats, though they do not have to contend with the static build-up effects of CD play and LP play.

Statfeet are dealing with the adverse effects of uncontrolled electromagnetic properties of materials. It is the electromagnetic equivalent of the control one can exercise over iron filings as a magnet is drawn over them.

One example of material polarity is that found with cables. The same polarity is found with all materials; though, apart from cables, it is difficult evaluate this except in the case of flat materials. The manner in which polarity requirements change during the use of our Vivacity AR platforms in accordance with the instructions is an example of this type of flat material polarity. Likewise, with the component build-up of all our products, the polarity of most items needs to be checked. This can be time consuming. We are probably the only company in this industry taking such care with the build-up of their products.

So the easiest explanation is that the Statmat material, and therefore the Statfeet, are the electromagnetic equivalent of a simple magnet, though very much more sophisticated.

Statfeet do not change the polarity of the material they are used with, just as magnets do not change the polarity of other magnets to which they are attracted by magnetism. Statfeet just smooth the electromagnetic properties in the correct direction where they are disturbed by materials being placed adjacent or on top of one another, rather like the pile on the surface of a carpet or of velvet. Or when brushing with the nap in the case of the cloth used to cover the playing area of snooker, billiard or pool tables.

For their size and thickness, Statfeet are very powerful. Their power can be increased in certain circumstances by placing one on top of another. But they need to be carefully positioned and orientated to work at their best, as one would with a non-passive electrical appliance or component.

INSTRUCTIONS FOR USE
Statfeet should be used under only one foot of any component or under only one Ringmat Dome, cone or other form of single point isolation support where these are used in place of a component’s own feet or where a component has no feet of its own.

We recommend one of the rear feet of a component (or Ringmat Dome, cone or other isolation support), usually the one on the right (assuming there are two rear feet or positions). However, some experimentation as to which component foot to use may be worthwhile in view of differences between components. For televisions place under the right hand front foot because of the static associated with the screen.

Statfeet should be used underneath a component in only one location.

Where several components are stacked on a multi-shelved systems table, one or more Statfeet may need to be used on the left-hand side instead of all on the right. Again, this can only be determined by experimentation, ie. through listening tests using one Statfoot at a time, following the signal chain. Start with the source component(s), then move to the pre-amp, then to the power amp.

When placing a Statfoot underneath the foot of a component (or Ringmat Dome, cone or other isolation support), try to ensure that: the whole of the Statfoot rests upon the support surface and that part of it does not hang over the edge of the support;

The Statfoot is orientated so that the corner containing the two circular cut-outs is placed nearest or towards the centre of the support platform (ie, that part of the support surface which is directly under the centre of the component). This requirement usually changes when using the “BLUE” series of Statmats, CDi BLUE and LP BLUE – see the instructions with these products.

so far as is practicable, the component’s foot (or Ringmat Dome, cone or other isolation support) rests centrally on the Statfoot.

Using one Statfoot on top of another increases the power and improves sound quality still further. When using two Statfeet on top of each other, align the Statfeet so that the patterns overlay each other as exactly as is practicable.

Statfeet are powerful, though passive, electrical devices. Their beneficial effect can last for some time after their removal. As in the case of Statmats for CDs, DVDs and LPs, this beneficial lasting effect needs to be borne in mind during the course of any evaluation work.

Also, remember that leaving Statfeet lying around, other than in their proper position, within the vicinity of your hi-fi system could affect the sound coming from the system.