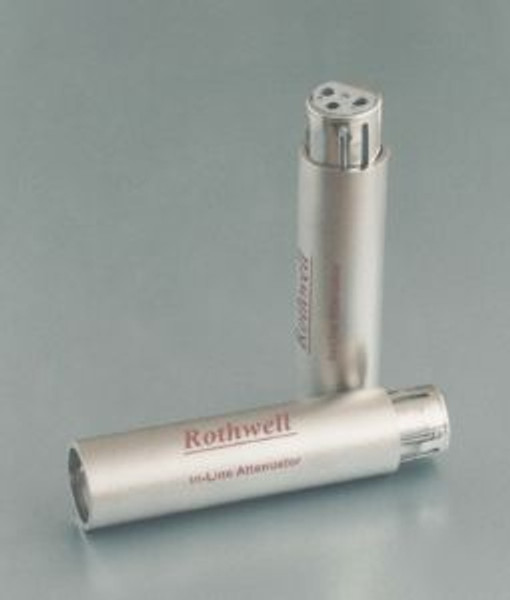 The price is for a pair of attenuators.

Choosing the right level of attenuation
We offer balanced attenuators with two levels of attenuation; -10dB and -20dB.  In most cases -10dB is the best choice, but occasionally more attenuation is required and -20dB would be the correct choice.

Will there be a loss of power?

No, the available power will not be reduced - the system gain will be reduced. Gain is the amount of voltage amplification which a signal undergoes. Absolute maximum power available is unaffected. First, let’s consider just how much voltage gain is required between a source component (CD player for example) and a pair of loudspeakers for reasonable listening levels. Although power amps are specified in terms of how many watts they deliver, it’s more useful to view a power amp as a voltage amp, but one which can maintain its intended output voltage when driving low impedances. A voltage swing of 30 volts RMS into an 8 ohm load will dissipate over 100 watts (112.5 to be precise). Most people consider a 100 watt amp to be more than adequate to create reasonable listening levels in a domestic environment (quite rightly), so how much gain is needed? Well, the output voltage of a CD player is 2V, so raising that voltage to 30V (so as to drive an 8 ohm loudspeaker to 100 watts) requires amplification by a factor of 15. A factor of 15 expressed in terms of decibels is just over 23dB. So, total system gain needs to be only about 23dB when using CD players and other similar line level sources. Most power amps have voltage gain of about 30dB. Some have a bit less (27dB for most Naim amps, for example) and some have a bit more (40dB for Audio Synthesis), but 30dB is quite typical. That means that most power amps have more than enough gain on their own without any additional gain from a pre-amp. However, it’s not unusual to find power amps partnered with pre-amps which have 20dB or more of additional gain. Some Conrad Johnson pre-amps for example have 26dB gain. So what effect does that extra gain have? Well, the pre/power amp combination will try to amplify the signal by the combined voltage gain, ie 56dB in the case of a 30dB gain power amp and 26dB gain pre-amp. 56dB is the same as a factor of 630, so amplifying 2 volts by 56dB gives 2 x 630 volts, ie 1260 volts. If your power amp could swing 1260 volts into an 8 ohm load it would dissipate just under 200,000 watts. Yes, 200,000 watts, or 200 kW! That is a huge amount of power. Of course, the reality is that your power amp won’t deliver 200,000 watts, it will simply be overdriven and go into clipping. Sure, you can turn the volume down to prevent the amp from being overdriven but operating the volume control down at the bottom end of its travel all the time has problems of its own. The channel balance will be poor and (depending on the way the system is designed) the gain will still be 56dB and background hiss and hum may be audible. So, to summarise, the voltage gain of the power amp alone is usually sufficient and there is usually no need for any further gain in a pre-amp. However, a little bit more gain than is strictly necessary is not a bad idea, because you can always turn down the volume control if it’s too loud. However, if the extra gain is excessive the volume control ends up never getting beyond the 10 o'clock position and the signal to noise ratio may be poor.

The Rothwell In-Line Attenuators work by cutting the signal by 10dB with a potential divider. The resistors which form the divider are carefully chosen so that they will work well when used with power amps whose input impedances are in the range of 10k to 1M, and with pre amps whose output impedances are in the range of anything up to about 10k. Alternatively, the attenuators can be used between a source component and pre amp or integrated amp with input/output impedances in the same ranges. The exact level of attenuation will, to some extent, depend on the input and output impedances of the equipment with which they are used but will always be channel matched to within 0.1dB. Our potential divider network has been optimised to give the widest bandwidth whilst maintaining an easy load for the source component and is implemented with top quality resistors for unsurpassed performance and transparency.

How Attenuators Can Improve Your Signal to Noise Ratio

How Attenuators Can Improve Resolution

If the pre-amp is based on IC op-amps, there are quite likely to be other sonic benefits in addition to the improved signal/noise performance. Though it isn’t widely acknowledged, all op-amps have a push-pull class B or class A/B output stage which will inevitably suffer from some residual crossover distortion. This type of distortion affects low level signals much more than it does high level signals. Negative feedback is used to correct this distortion, and at full output voltage swing the specifications will be very good. However, the full output voltage swing on op-amps is about 36 volts (peak-peak) and this is much greater than is required in a pre-amp. Sure, op-amp specs are great at 36 volts, but most power amps are driven to their maximum output with a signal of just 750mV so it should be clear that the op-amps within a hi-fi pre-amp can never run at anywhere near their optimum. Also consider that 750mV is the signal required for full power. When listening at more modest volume levels the signal will be much less. Assume that a more modest level means 20dB below maximum, then the pre-amp’s output signal will be just 75mV. Now consider that low level details within the programme material are at an even lower level than this. Reverb times, for example, are specified as the time taken for a reverberant sound to decay to 60dB below its original value, so it’s reasonable to assume that signals 60dB below the programme peaks are still audible. That means that signals 60dB below 75mV are significant ie 0.075mV. When you now consider that op-amp performance measurements are taken with a signal swing of 36 volts but what is really important is what is happening below a tenth of a millivolt, it becomes obvious that the low-level crossover distortion inherent in op-amps may be audible as subtle masking of detail. The In-Line Attenuators will improve the situation by allowing the op-amps to work with a higher signal level without the music becoming too loud (due to the 10dB signal reduction at the inputs to the power amp), so the crossover distortion will be effectively reduced by swamping it with a larger signal swing.