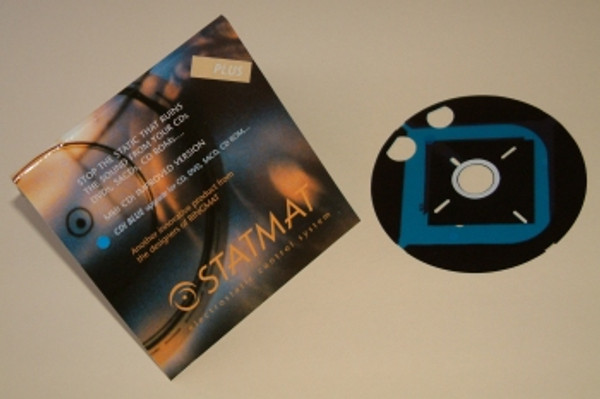 STATMAT CDi BLUE PLUS is a new and far more powerful Statmat. Like the Award Winning standard CDi Blue, it comprises two Statmats working together at 90º to each other and on different sides of a 0.1mm blue polyester substrate. The Statmat film on top is a mirror image of the standard one below.

However, STATMAT CDi BLUE PLUS differs from the standard CDi Blue in the following 3 ways:

As with all Statmats, there is a special exchange/upgrade price for existing users. Please contact your local Ringmat supplier.

It is important that the re-peelable adhesive collar around the centre hole on the underside of the lower film maintains its adhesive properties. Therefore, care has to be taken not to drop the Statmat onto the carpet or to place it on any surface from which it can attract hairs and other particles. Also, care has to be taken that the disc to be played is clean and that greasy fingerprints have not contaminated it. Moreover, that any such greasy particles have not contaminated the clamp.

Users have reported that Post-it® sticky notes made by 3M are very good for cleaning up and refreshing the adhesive collar.

It is emphasised that, as with all Statmats, the sound, and sometimes the picture, is improved when used with DVD, SACD and CD-ROM software.

Nominal sizes of STATMAT CDi BLUE PLUS are:

Exchange any version of the Statmat to a Statmat CDi Plus

Exchange any version of the Statmat to a Statmat CDi Blue