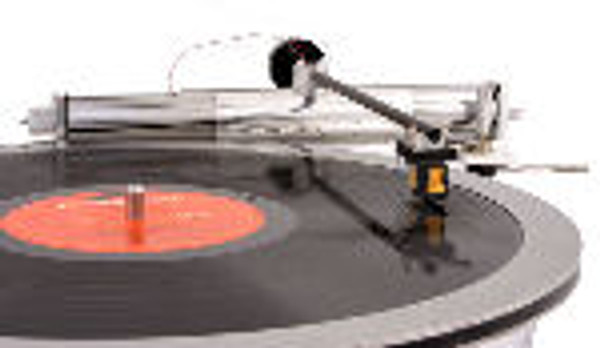 The playback of a record should imitate the cutting of the lacquer as closely as possible.

Pivoted arms, on the other hand, are the most commonly used tonearms. These can be further subdivided into unipivots and non-unipivots, as well as pseudo-unipivots.

With common pivoted arms (also called radial arms), there is zero tracking error only in two instances. At other points, there is tracking error. This is minimized by giving the pivoted arm the familiar offset angle. The skating force  is not eliminated, however, but instead increases. This can be corrected, of course.

Unfortunately, the skating force depends on the friction between the record groove and the stylus tip, as well as the cut of the stylus. It also depends on what is recorded on the record, even the quality of the vinyl. As one can see, correcting anti-skate is always not perfect, technically. All this ceases to be an issue with a tangential tonearm, as there is no skating force.

Basically, setting up pivoted arms properly with the various tools around is essential to minimize these tracking errors, as well as controlling the skating force.

Designing and manufacturing a parallel tracking tonearm is not as simple as it may seem and only thorough engineering can result in a good functioning device. Precise and accurate geometrical proportions are essential to get it right. As a result, prices of the high-end parallel tracking arms are in most cases far beyond the budget of most audiophiles and music lovers.

And this is where The Conductor comes in. Simplified, but without sacrificing the benefits of tangential tonearms, sonically high-end, and most importantly offered at a saner price than the other high-end competition.

"The density and tonal richness, the sheer amount of detail the arm digs out of the initial transient and the body of the note, its fundamentals and its harmonics both above and below the note itself are something to behold. Anyone who has a reasonably developed system will know how hard it is to get an audibly and quantifiably better sound from their system.

So often we start thinking "well yes, there's more detail" only to realize it's actually a midband dip artificially boosting the transients or instruments like cymbals. Not with this arm. It seems to be actually delivering the real thing."

..."I've found over the last few months that due to its particular sound, this is not an arm I could live without. I have no hesitation in describing it as a world-class performer and a genuinely exciting and valuable new entry into the analog world.

Rebuilt Troika Cartridge. Back in stock, the most famous linn cartridge of all time!